I was speaking with Phil Wadler at ICFP about full-spectrum programming languages, and it came up that Phil wasn’t familiar with the inconsistency in the Sage theorem proving axioms from Knowles et al. ’06. He prodded me to talk about it here. 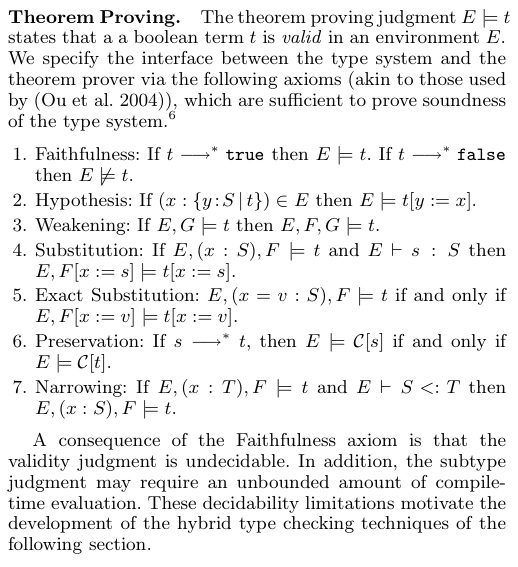 Talking with Kenn Knowles, he agreed—Faithfulness should instead say E ⊨ not false—the soundness of the logic comes from not being able to prove false from an empty environment. Kenn had an interesting analysis, which I’m including wholesale:

In practice, of course, the soundness of e.g. SMT is not in question. There are really two important and separable questions that axioms such as those of Ou et al ’04, our Scheme ’06, and our PLPV ’09 conflate somewhat. Neither is answered to my satisfaction.

With regard to Kenn’s first point, Belo et al.’s ’11 syntactic semantics gives one answer for how to give semantics to contracts, though there’s plenty of room for less syntactic analyses.